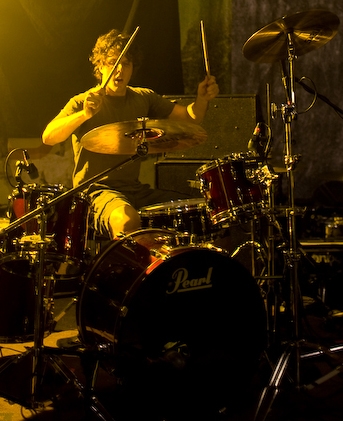 First performing together at the Van’s Warped Tour in their hometown of Orlando, Florida, Transmit Now has quickly invaded the iPods of fans across America. The band has previously won the praise of Alternative Press Magazine, and if you’ve watched MTV at all this year, then there’s a good chance you’ve already heard Transmit Now’s catchy hooks in several of its shows. Now signed to the Silent Majority Group label, Transmit Now is busy both touring and recording throughout 2009.

Drummer Greg Parrow was first introduced to drums playing percussion in his middle-school band. "I’m not sure what it was about seeing that drum kit in the corner of the band room, but I’ve been hooked to drums ever since," he recounts. Asked what he enjoys most about being in a band, he adds "I love playing on stage… It may not be an original answer, but it’s the truth. When I’m connected to the guys in the band and everyone’s feeding off the crowd’s energy… there’s really no greater feeling in the world." A fan of many styles including Country, Classical, and Hard Rock, Greg supplements his power-pop drive with ideas from other genres, an important part of Transmit Now’s successful formula, one the band feels will keep relevant and accessible for years to come. As for the present, Greg and the other members are just focused on making new fans, and creating great music.