Alex Kuldell began his drumming career in 1986 with the Washington Scottish Pipe Band under the direction of lead drummer Ed Bauder.  It was there that he first learned the art of performing for a multitude of audiences and environments.  Throughout grade school, Kuldell studied with the late Samuel Evans developing his foundation in rudimental drumming while performing with The Patriots of Northern Virginia. He performed with various honor bands, to include most of the district-wide musical ensembles within the Fairfax County school system, the George Mason Honor Band, the District 10 Band, and the Virginia All-State Band.

Alex Kuldell has enjoyed success in the solo drumming arena as well. He was the Eastern United States Pipe Band Association Professional Snare Drum Solo Season Champion in 2000, 2001, and 2012.  In 2013, he won the Eastern United States Pipe Band Association's 50th Anniversary Drum Salute contest. He is still an active competitor, adjudicator, and continues to study with Stephen Creighton of the St. Lawrence O'Toole Pipe Band, the current pipe band drumming champion of champions.  While continuing his passion for the pipe band, Alex is an active member of the Celtic Percussion Collective which works to pass on the technical and musical abilities for those interested in learning about a variety of styles in the art of drumming.

Currently, Alex is a professional drummer for the United States Army Old Guard Fife and Drum Corps, an active duty military band.  He earned a coveted snare spot upon graduation from Falls Church High School. The Old Guard is one of the top rudimental drumlines in the world and is part of the U.S. Army’s Official Escort to the President of the United States.  They participate in various national and international events, averaging several hundred performances annually. In addition to his service with the Old Guard, Alex is the drummer for the up and coming blues/soul band "Vintage #18,” an up beat band generating a fresh vibe throughout the Washington D.C. area and along the East Coast. 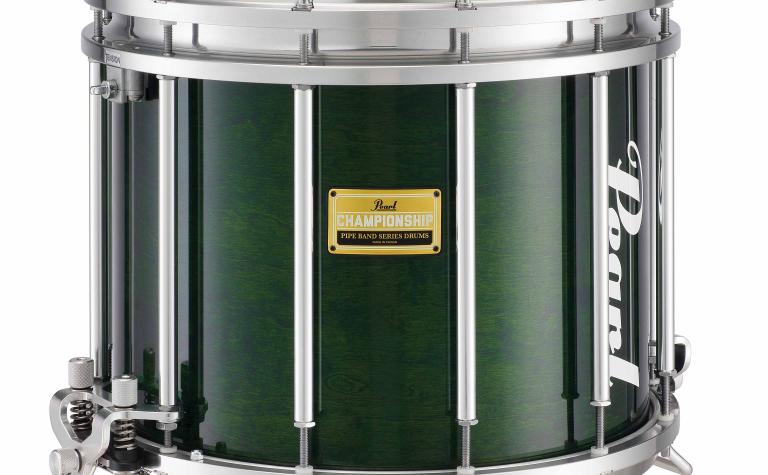 Championship Medalist Snare Drums combine the ultimate in build-quality, tunability, and appearance. The 4-ply 100% Birch free-floating birch shells of Championship Medalist Pipe Snare Drums deliver the crack and snap that makes your tunes groove, while also providing the most expressive canvas for low-dynamic playing. Weighing in at just 13.8lbs, the Medalist is one of the lightest on the market. The weight reduction has been reached by looking into every detail of the drum, from it's 5.0mm even-ply shell, to the innovative top and bottom snare strainers featuring Pearl's Quick-Release Snare System. The top snare mechanism features a 28-strand chrome-plated carbon steel snare which is simply adjusted via a standard drum key. Paired with the warmth of maple tenors and maple bass drums, the Championship Pipe Battery gives a fantastic sonority across the entire frequency range. Walk onto the competition field with full confidence. Pearl Championship Pipe Drums... the chosen Instruments of Champions.