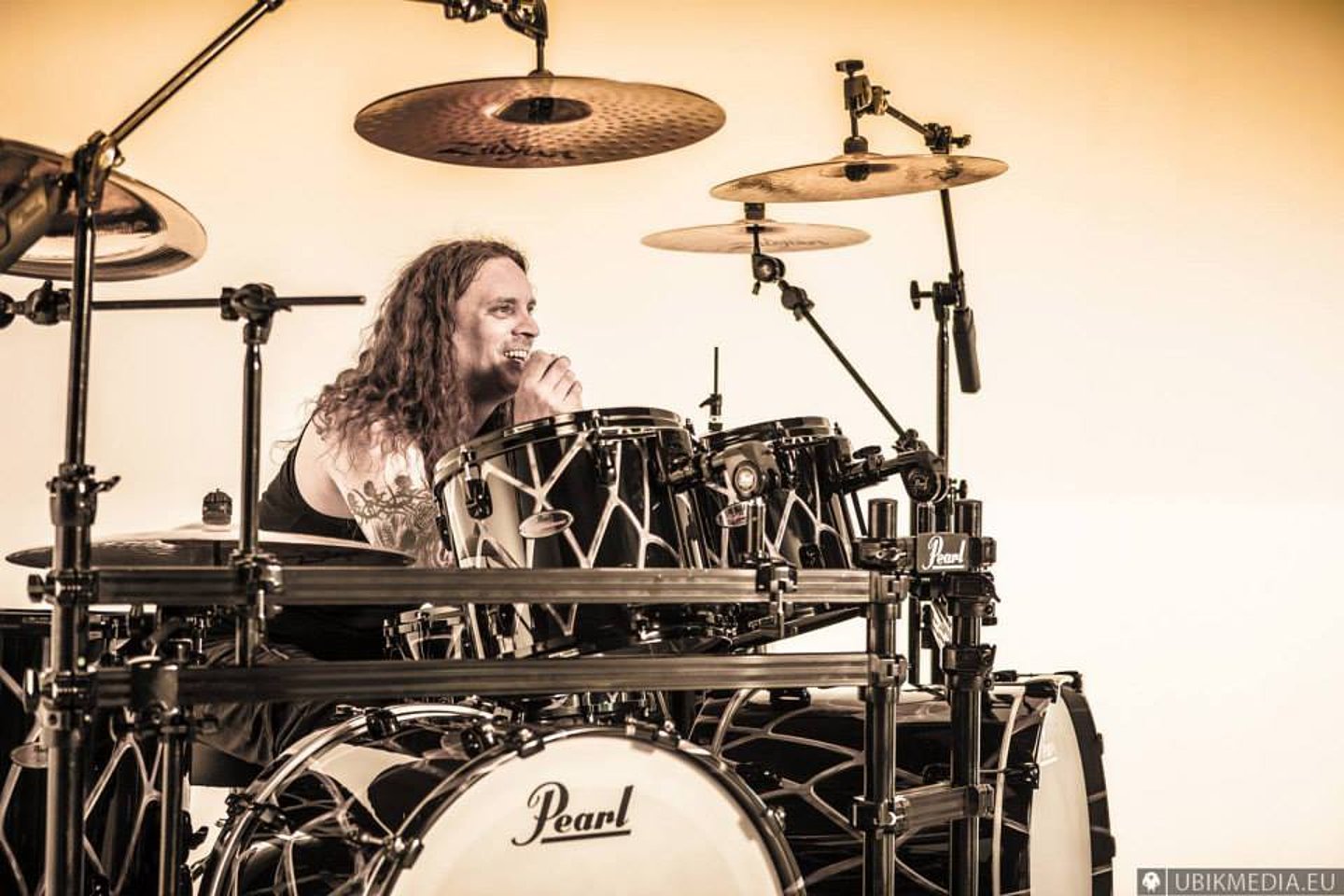 For several years now, André Hilgers ranks among the best and most accomplished Heavy Metal and Hard Rock drummers in Germany. His play style is characterized by big dynamics and impressive punchin particular. His abilities were put to the test on numerous albums by popular bands such as “Axxis”, “Rage”, “Silent Force” or sinner, but even more so during live concerts. He is also a Pearl artist behind a custom Masterworks drum kit.

What is it you like so much about playing Pearl Drums?
Pearl Drums was my first professional drumkit. Pearl has the best Hardware I ever had

Which drummer/band influenced you most into playing drums?
To many to mention, but Mike Portnoy, Deen Castronovo, Tomas Haake, Tommy Lee, and Tommy Aldridge are a few of my personal influence.

Who in your mind are the drummers of tomorrow, who has caught you eye ?
One of the most exciting drummers in metal is Tomas Haake from Meshuggah.

What do you like most about being a drummer?
Getting to hit things and beeing the time keeper.

What do you practice and for how long?
A lot of things, in this moment I practice a lot of Afro Cuban Rhythms, and some paraddiddles for my feet.

What is your best advice to a young player wanting to make it in this industry?
Try to develop solid technique from the start with a good timing. Listen to all kinds of music, so you have a larger pool of influence to get your own style of drumming.

If you had the chance to play drums for another artist who would it be?
Machine Head, Dream Theater, Journey, Pink

Andre Hilgers was born on 30th of August 1974 in Remscheid/NRW. Aged 7 years, he was sitting behind a drum for the first time, concentrating on learning drums with 10. After that he took lessons at rock – jazz style for 6 years, as well as 3 years guitar and 2 years singing lessons.

The most important stages of André’s career.

André had his first band experiences from 1986 onward, where he play in various bands for several years and gained live experience at the age of 12. He joined “Ninja” from Wuppertal in 1989 and recorded the “Liberty” longplayer. At the same time he helped out three other local bands.

From 1993 on Hilgers contributed to “Mendacious Messiah” from Bielefeld for about ten gigs and a demo tape. Between 1994 and 1997 Hilgers hooked up with “Vanize” from Wuppertal. During that time he played about 40 shows with the band and recorded the album “Twins?”. With the Paiste – endorsement a first professional milestone was reached.

From 1998 to 2007 the drummer from Remscheid played with the excellent Hard Rock / Heavy Metal cover band “Bourbon Street” with the “Crystal Ball” singer Steven Mageney.

In 1997 Hilgers took jobs with “Regicide” (later “Cyberia”) and “Noisehunter”. He also featured on the solo CD of “Sinner” guitarist Alex Beyrodt. This meeting had a big influence on Hilgers’ subsequent career, because Beyrodt’s solo project developed into a solid band formation (“The Sygnet”) which later became “Silent Force”.

“The Sygnet” signed a management deal with “Bottom Row” and played four concerts as a supporting act for “Pink Cream 69”. They signed with the label “ZYX” right after and recorded their debut album “Children Of The Future”, which was released in 1998. A four-week nation-wide tour as support for Metal Queen Doro Pesch and her band “Doro” followed.

In the summer of 1999 “The Sygnet” played a show at the world famous “Wacken Open Air” and developed into “Silent Force”.Together with the exceptional singer DC Cooper from Pittsburgh/USA they released their first longplayer “The Empire of Future”. Hilgers played two festival gigs in October of 1999 before going on a two-week Europe tour as a supporting act of Finnish genre-icons “Stratovartius”.

In 2000 André took a step forward and became a fulltime musician and chucked his learned profession in. 2001 held two prominent events: “Silent Force” played at the “Wacken Open Air” again and the band released their second album “Infatuator”. Today this counts as a genre classic.

From March 2002 onward André and “Silent Force” toured with the Brazilian band “Angra” in an extensive tour around Europe. A Germany tour followed in May as support for U.D.O. From August 2003 on, Hilgers jumped in for several “Axxis” festival shows and joined the band on their “Time Machine”-tour of March 2004.

Dennis Ward produced the third “Silent Force” album “Worlds Apart” which was published in September 2004. In early 2005 the band had a successful tour through Japan, after which the second “Razorback” album was recorded. Hilgers joined Melodic Metal powerhous “Axxis” as a constant member and was integrated in the songwriting process. As a quintet they recorded “Time Machine”, which hit the charts on rank 72.

In the meantime he recorded the well-received project-album “The Raven Ride” under the name of “Empire”. He recorded together with scene authorities such as singer Tony Martin (ex-“Black Sabbath”), bassist Neil Murray (ex-“Whitesnake”) and guitarist Rolf Munkes (“Razorback). The album was published in 2006.

The new “Axxis” album “Paradise in Flames” was released in January 2006 and reached rank 45 in the German charts. A Germany tour with “Gotthard” and shows all over Europe together with “Helloween” followed as well as a double headliner tour with “Krokus” in May.

In 2007 André became the new drummer for the German Power Metal band “Rage”. His first performance test was a mini-tour together with the “Lingua Mortis Orchester” through Russia, Ukraine, Czech Republic in early 2007 as well as the – now legendary – appearance at the “Wacken Open Air” festival.

The fourth “Silent Force” album “Walk The Earth” was released in February of 2007, which had tremendous success in the Japanese charts, which lead to a successful tour in the land of the rising sun. After the new “Axxis” longplayer “Doom Of Destiny” was unleashed upon the world in mid November 2007 an almost completely sold out tour as support of “Helloween” and “Gamma Ray” followed.

The end of February 2008 marks the release of the new “Rage” CD: “Carved In Stone” (charts rank 24), on which André had a brilliant entrance. He had left “Axxis” in the meantime. “Gib Dich nicht auf” was released in 2009 as a web single, after having participated in the Pro 7 TV-show “TV Total” with host Stefan Raab, and using said song in the “Bundesvision Song Contest”. The band represented Northrhine-Westphalia and reaching a sensational third place.

“Rage” released their new album “Strings To A Web” in early February 2010. The CD reached rank 27 in the charts and a 18 month tour around the globe followed. André joined “Sinner” in early 2011 and in early September of the same year their album “One Bullet Left” was published.

In March of 2012 “Rage” released “21”, the last studio piece with André. It reached rank 21 of the charts. The next “Sinner” album “Touch Of Sin 2” was published in August 2013. From 2013 on André Hilgers leads his Drum-School “Tight Drums”, which is targeted at beginners as well as advanced players. December 13th 2013 marks the day on which the long awaited “Silent Force” album was released after eight years. “Rising From The Ashes” was released via AFM records.

A circle was closed for André Hilgers, guitarist Alexander Beyrodt and singer Michael Borman, because the latter took over the vocals, just like on the debut album by “The Sygnet” (1998).

During 2014 Hilgers ended his involvement with the band of the “Primal Fear” guitarist Mat Sinner. A press release dating to the 4th of February 2015 revealed that Victor Smolski and André Hilgers are retiring from “Rage” due to “musical as well as personal differences”.

During 2015, when the third album of ex-“Accept” and “Victory” guitarist Herman Frank began to shape, André was hired to do the drum work for “The Devil Rides Out”.The album was released on November 18th 2016 via AFM Records, featuring “Masterplan”-singer Rick Altzi, “Jaded Heart”-bassist Michael Müller and mastermind Frank himself on the six-string forming a band set-up. With plans for live shows in mind the bands album received very good and even outstanding reviews in print and online press alike, and is even regarded as one of the best traditional Metal albums of 2016.

2017 follows a european tour with Herman Frank and some temporary concerts with his old band Axxis. And to make sure it doesn’t get boring, André 2018 establishes his Youtube channel with more interesting mini tutorials and produces more instructional videos for his shop.

In 2019 the next masterpiece “Fight the Fear” is released under the Herman Frank banner and reaches #89 in the german album charts. Of course there will also be a tour. In 2019 André becomes the new drummer for the German Hard Rock veterans “BONFIRE”. We can expect to see a lot more from André Hilgers, his exceptional drumming and his further musical endeavors. To be continued. 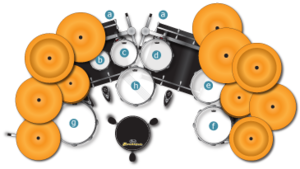 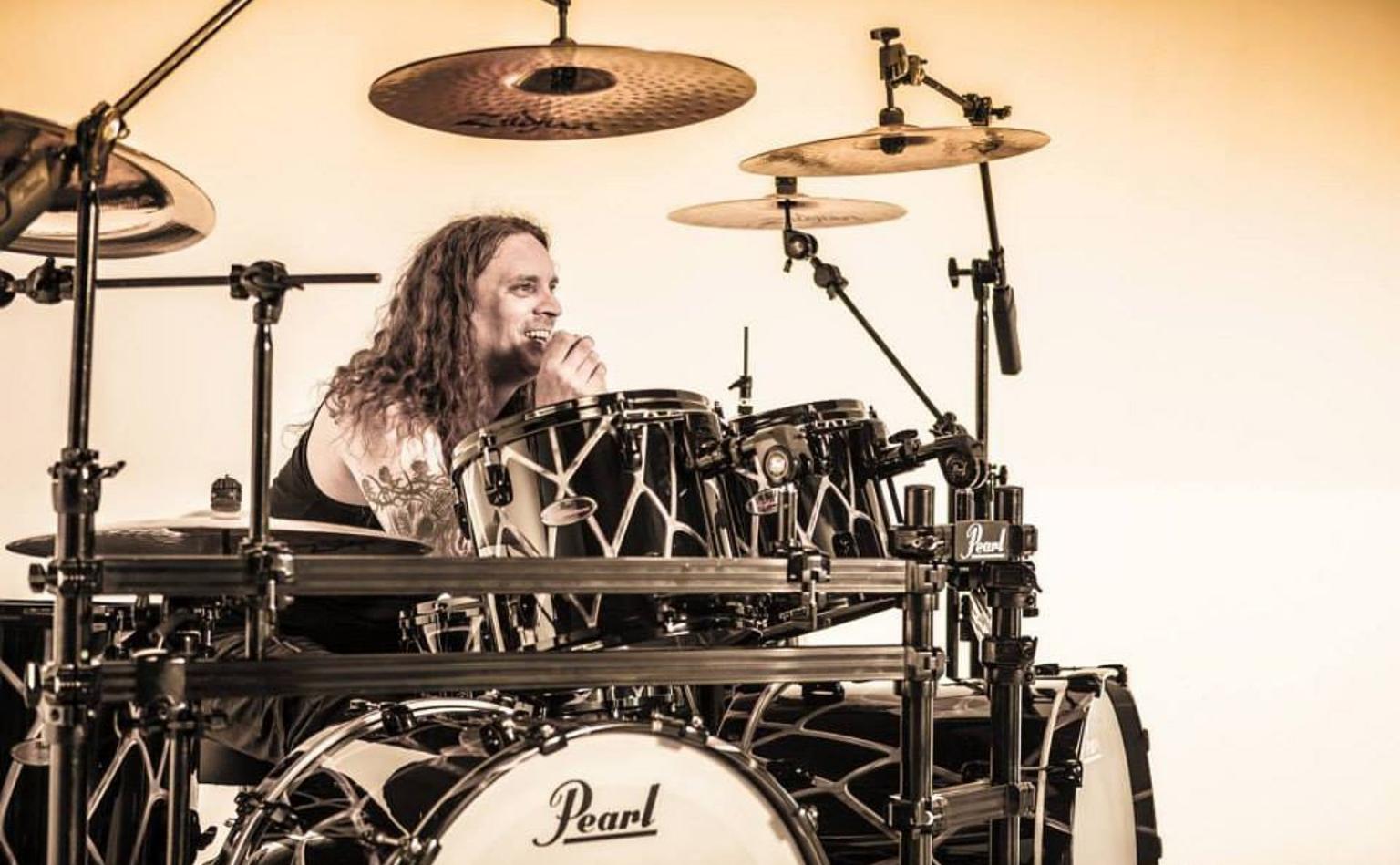 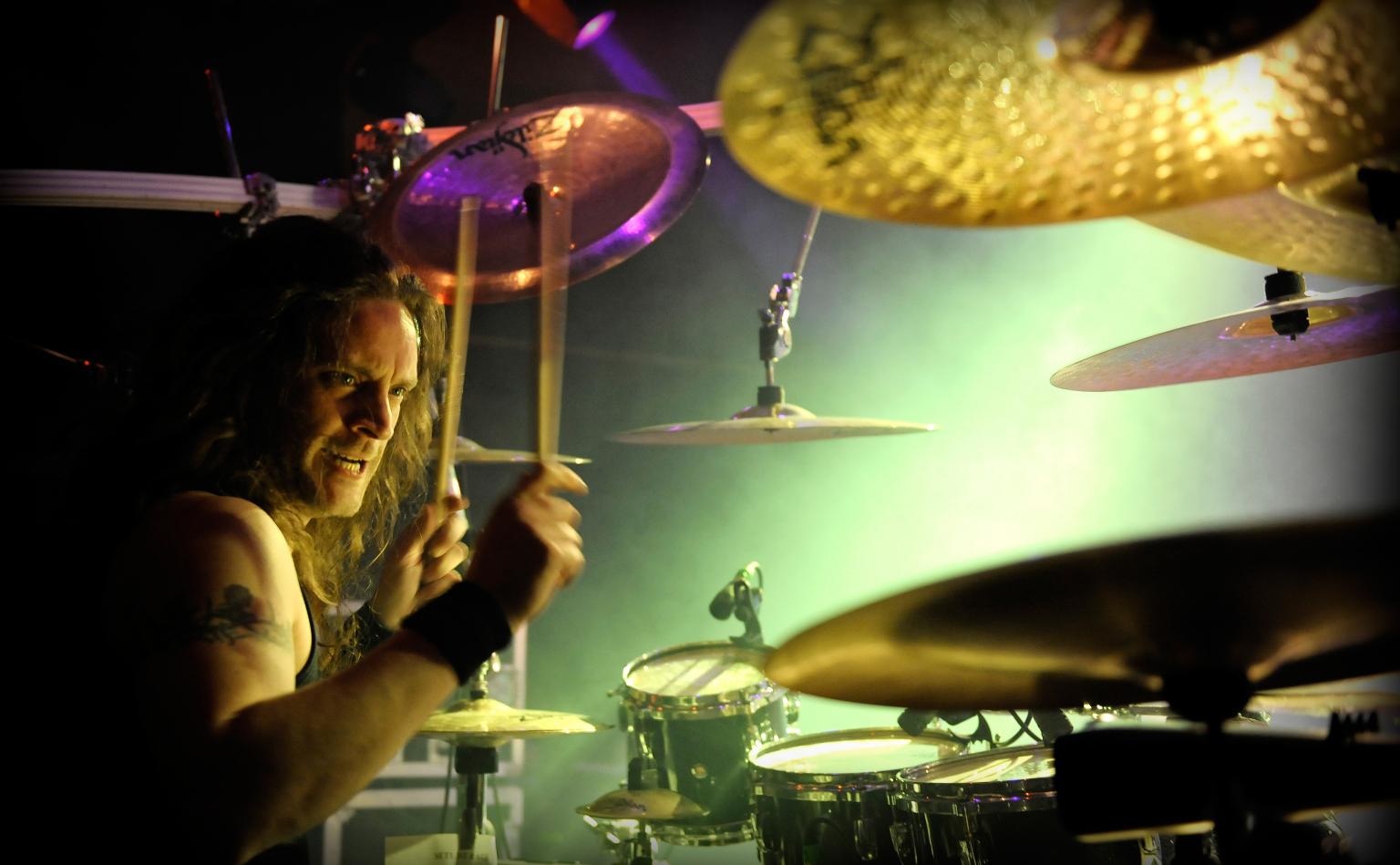 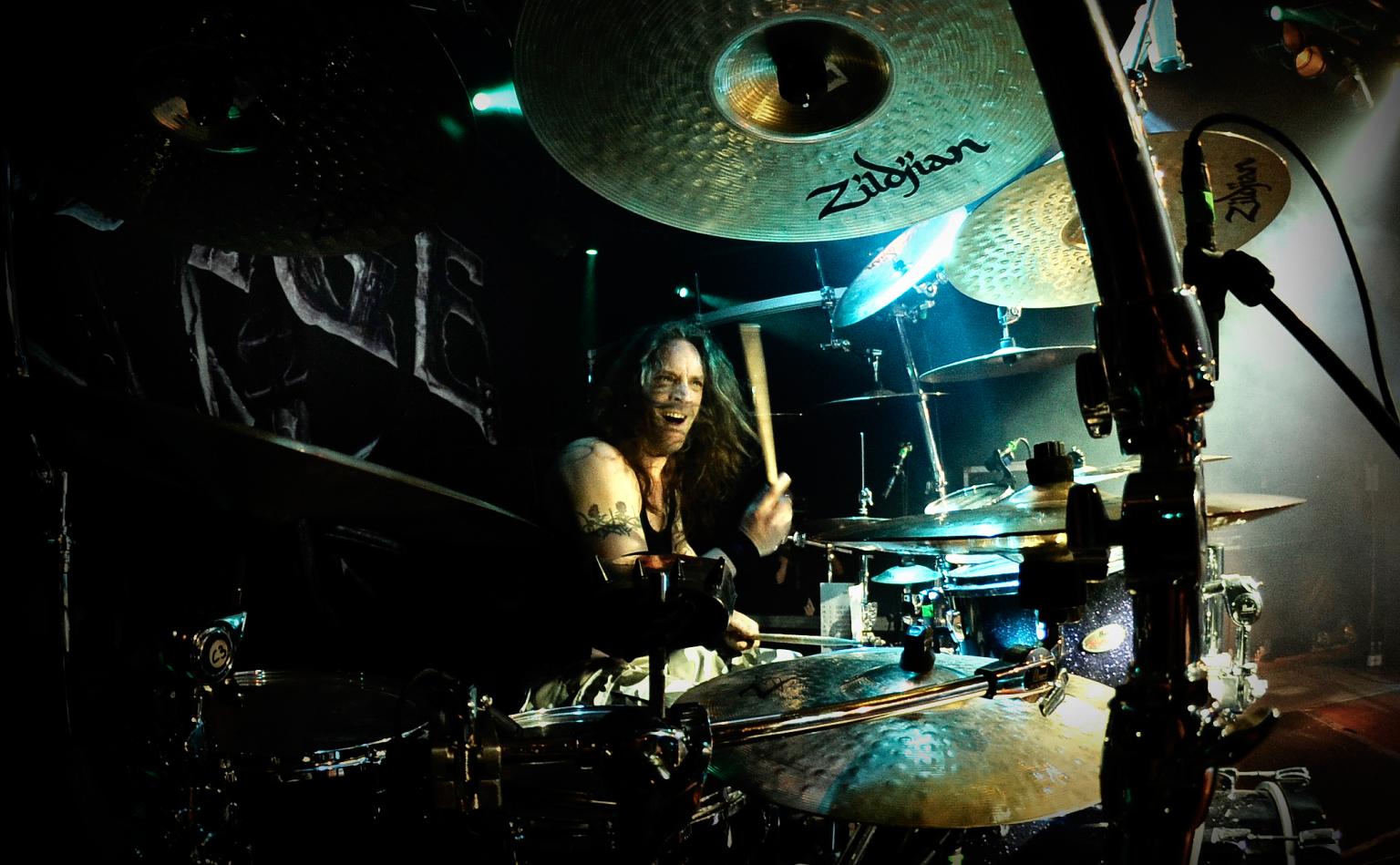